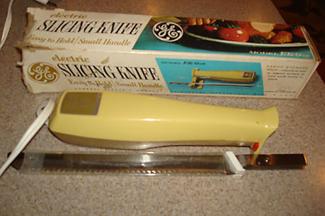 Tales of Holidays Past

When I was a child, my family would gather for the holidays at my grandparents’ home in Granville, NY. The kids in the family would have our own setup in the living room. This was 2 card tables side by side, and, while a bit wobbly, they did the trick.

One of the things that I remember most was the semi-friendly argument that ensued about who would carve the ham or turkey. After some back and forth, my grandfather ultimately won this epic battle, and those of us kids who bet on Grandpa would collect our winnings – usually a baseball or football card. The vintage, yellow handled GE electric knife was big and loud, and I still remember the whirring sound and how nervous we were about Grandpa’s carving after he had downed a couple of Manhattans.

After the ceremonial carving, my grandmother broke out her baked beans, made with bacon and brown sugar. Among the adults in the family they were a huge hit, but we kids at the card tables hated them! Our parents would give us advance notice to be polite and eat the beans for Grandma’s sake, and it was an unspoken rule that the bowl of baked beans set upon the kids’ table would be empty at the end of the meal.

At this point in the story, I should introduce Poncho, my grandparents’ retriever. Poncho loved us kids, and would eat ANYTHING. Poncho was no fool, and he knew what table to be under at the holidays. After Grandma lovingly watched my cousins and me glop an ice cream scooper full of beans on our plates, the adults would forget about us kids and proceed to feast in the dining room. At this point, Poncho secretly got his fill of lots of holiday food under the table, but mostly baked beans! Grandma would always be amazed at how our plates would be clean.

After the holiday meal, the kids and guys in the family would gather in the den to watch football, and Poncho would follow. You might be able to guess what would inevitably ensue. After a while, Poncho, who had no manners whatsoever, would let loose the dreaded SBDs, AKA silent but deadlys, as a result of gorging on our beans. Only the kids knew who and why, and my uncles would point fingers at who they thought was to blame for the foul odor. Poncho would just lie on the floor with a look of complete innocence, and sometimes the den had to be cleared or a window opened. We kids laughed and laughed, happily singing the “beans beans, good for your heart” song.

Poncho lived a long life, and every year I reminisce about Grandma’s beans and the fun we had as kids. As I grew older I developed a taste for those beans, and I miss Poncho and my Grandparents. I’ve decided to carry on the tradition here at the Del-Sette household, and next year we look forward to serving homemade baked beans based on Grandma’s recipe (we will have to make a lot of beans for 8 dogs, and also have to open lots of windows afterward). I’m also in the market for a yellow handled GE carving knife from the 50s or 60s and a couple of old card tables. It’s funny how traditions are passed on! 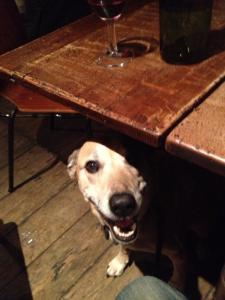