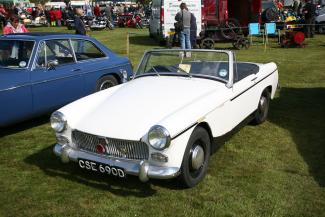 An MG Midget – car and driver very similar to how I remember my Dad with his pride and joy.

“It’s sad to know I’m done. But looking back, I’ve got a lot of great memories.”

More than anything else, my father loved his cars.  From the time I could remember anything, I picture my Dad doing something car related — washing and waxing, fixing, buying or selling, but, most of all, driving.

When I was around 25, my father had a 1970’s MG Midget – one of those 2 seater, convertible sports cars.  You know the kind – shiny, chrome and leather, turning heads, making you want to take the day off and cruise!  It was his pride and joy, and it was so clean you could eat off of the thing.

One fine Spring day, my best friend Scott brought his 6 year old son Joshua over to the house.  Josh stopped at the MG, in awe of the little shiny beauty sitting before him.  “Do you like it”?  my father asked as he hurriedly came out the screen door and it slammed behind him.  “I want to go for a ride!” screamed Joshua.  But it was not to be as my Dad was on his way somewhere more important.   “Maybe the next time you come over,” my Dad told the disappointed child, whose sadness couldn’t be hidden.

More than a month later, on a beautiful, blue-sky, sunny Sunday morning, my Dad was up early, which was unusual for a weekend.  “Where are you going?” I asked as he headed out the door.  “I’ll be back later” was all he said as he put his driving cap on and fired up the Midget.

About a half hour later, there was a knock at Scott’s door.  “Are you ready to go for that ride, Josh?”  my father asked the sleepy, surprised and excited little boy standing at the door, as he handed him a riding cap. They drove all over on that beautiful day in the spiffy little two seater with the top down, the radio playing, smiling and waving to all they saw.

Toward the end of the day, I heard a car radio outside.  My father stopped at the house for a minute.  There was Joshua, with the too-big cap on, grinning ear-to-ear, in the passenger seat.  I’ve never seen a happier kid;  it’s a scene that is burnished in my memory.  I can still smell the freshly mowed grass on the lawn next to where the car was parked, and I can see the tweed cap covering Joshua’s ears.  Both he and my father, who was wearing his own cap and scarf, looked ridiculous and ridiculously happy at the same time.

My Dad passed away recently, and it’s been a few years since I last saw the all grown up Josh, but he brought up that ride every time I saw him. Scott says he still talks about it.

More than anything, that’s how I remember my Dad – spontaneous and funny.  If we all leave a memory like that for someone when we go, then it will be more than enough.

“If you’d rather live surrounded by pristine objects than by the traces of happy memories, stay focused on tangible things. Otherwise, stop fixating on stuff you can touch and start caring about stuff that touches you.”