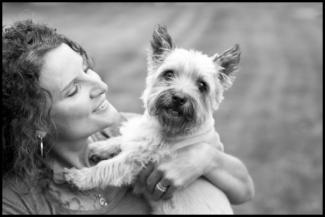 If there are no dogs in Heaven, then when I die I want to go where they went.—Will Rogers

The biggest event in the Del-Sette household in 2013 was the loss of our faithful Cairn Terrier, Nessie.

She was named after that famous creature of the sea, Loch Ness, and while Cairns were bred in Scotland to rid farms of pests, Nessie would have none of that.  Unlike our other Cairn Inky, Nessie was too cosmopolitan to dig a hole, let alone spend her precious time hunting for varmints.

I’ve always believed that all is fair in love and war, and the first time I met Nessie, I brought my 2 Chocolate Labrador puppies to Joy’s house with the idea of scoring some sorely needed cuteness points.

Nessie didn’t like the idea of two young ladies and their owner garnering any attention from her human, and she let her feelings be known by heading for the nearest corner.  There she stayed, facing the wall, refusing to even turn her head and look at the lab sisters, as if she was too good for them.  That was her attitude for the rest of our time together.

Despite her arrogance, Nessie took her job as pack leader seriously.  She raised the labs as if they were her own and didn’t stand for any shenanigans.  When she had enough of their wrestling, she would run up to them and, since they were small puppies, nip their chins.  The labs would then “go flat”, with all fours splayed on the floor.  As soon as Nessie was a few steps away, they would start all over again.

Once the labs were full grown, Nessie had to run and jump in the air to nip their chins.  Although they were 5 times her size, they always dropped and went flat upon Nessie’s chiding.  Any visitor who witnessed Nessi run at full bore toward 2 wrestling giants and then leap like Michael Jordan toward a Lab chin would stare in amazement.  But the floor shaking, tandem lab drop that followed was even more bewildering.

Nessie liked to sit on the narrow ledge on the back of our couch, looking out the window at the valley below.  The labs copied this, which was fine until they were full grown.  Imagine two 75 pound dogs trying to fit themselves onto a six inch couch back!

Nessie’s rituals bordered on the obsessiveness of the Rain Man.  At 7:00 am on the nose, and again exactly at 6:00 pm, Nessie would “woo woo” until her food was served.  For the uninitiated, a woo woo sounds exactly like that – 2 high pitched howls repeated over and over.

Nessie was tenacious in her insistence, and she had no problem howling until one of us acquiesced from a Saturday morning sleep in to feed her and her brethren.  Once, upon arriving home from an event with my wife, there was Nessie, woo wooing hoarsely.  Had she been woo wooing to nobody for the last two hours past dinnertime until we arrived home?

After her meals, Nessie would go out on the lawn and excitedly bark at nothing.  It reminded me of a neighbor when I was growing up.  He would go out and water his lawn in shorts, black socks and sneakers, yelling and shaking his fist at passersby, hose in one hand, fist in the air, barking expletives.  My wife said it was Nessie’s way of saying good morning or good night to the world, but I thought she had something else in mind.

After telling the world what she thought, Nessie went on the hunt for the perfect place to do her business.   Upon finishing, Nessie, would fling grass in the air with her back paw, dancing happily.  After a few twirls, she would run gleefully around the yard at full speed, happy to be alive.  I guess when you are a dog, you learn to find joy in the simple things.

Nessie loved our walks on the trails around our house.  We would throw pebbles in the stream so Nessie could try and find them.   She always found a pebble – it didn’t matter that it wasn’t the one we tossed in.

She also loved people, and would sometimes get so excited upon meeting them that she would pee on their shoe!   I always imagined that this practice might be a ritual by some as yet discovered native tribe and was learned by certain dog breeds, passed from generation to generation down to Nessie.

In the Spring of this year, and at age 15, Nessie wasn’t acting well.  We took her to the Vet and found out that she had a tumor in her liver.  We took her to a veterinary surgeon who said that they could try to remove the tumor but the outcome was uncertain.

What if the operation was a success?  Given a Cairn’s life expectancy, would she live the rest of her life just healing and in pain?    The flip side was that, if we did nothing, she was certain to die soon.   Even though the chances of survival were slim, we had to do everything we could, because she was part of the family.  The surgery was scheduled for the following week.

The morning of the surgery, I gave Nessie a hug, and Joy brought her to the animal hospital.  Upon arriving, two veterinary surgeons brought my wife into a private room and told her that based on the tests that were done, they may only be able to remove part of the tumor and could not guarantee that Nessie would even survive the operation, or ever recover and be able to leave the hospital.  Even with the best case scenario, expecting her to live another year or more was extremely unlikely.  A significant portion, if not all of that time, she would be in pain and healing.  It was decided that Nessie would spend her final days with us in the surroundings that she loved, without the pain and suffering of the surgery.

Until she passed, I would carry Nessie wherever she wanted to go.  She no longer woo wooed, and the happy dance was gone.  But, she was loved and cared for, and in peace.

Joy picked Nessie up and carried her to her favorite places on our property – the trail, then the stream, and then the pond.  She came back in and took her last breath in my wife’s arms.  It was the way she would have wanted it, and us too.

As I reflect on Nessie, I realize how much our animals fulfill us.  I’ve learned from Nessie and our other dogs that the little things are what bring Joy, like a walk in the woods,  a good meal, or being happy not for any particular reason. So in 2014, I’m going to resolve to spend more time in nature, going for long walks with the pack, and savoring the simple things.

I explained to Saint Peter
I ‘d rather stay here
Outside the pearly gates
I wont be a nusiance,
I won’t even bark,
I’ll be very patient and wait.
I’ll be here,chewing on a celestial bone,
No matter how long you may be
I’d miss you so much
If I went in alone
It wouldn’t be heaven for me.