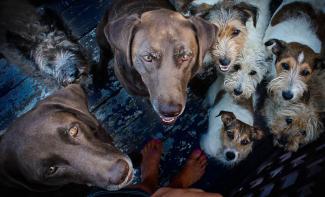 It’s the Dog’s House – We Just Pay the Mortgage

To sit with a dog on a hillside on a glorious afternoon is to be back in Eden, where doing nothing was not boring – it was peace.

I used to find it hard to live in the moment. I didn’t have patience, and I put a lot of emotional energy into outcomes that I really didn’t have much control over.

Then, my wife Joy and I decided that owning eight dogs (now seven) was a good idea, and they taught me a thing or two about life.

It’s hard to not live in the moment when you are trying to prevent dog chaos times eight. Necessity really is the mother of invention – I have no choice but to turn off the mental tape recorder of thoughts and worries to help with the dog chores. Chasing a dog that’s escaped from the house, shooing a dog from the garbage, or breaking up a scuffle are all part of the daily agenda.  Then again, so is getting licked to death the minute the alarm goes off or I walk in the door, as if I’d just returned from a decade-long voyage.

At first, I abhorred the role of dog walker. I had seen these kinds before, the hapless souls who passed by my old house, rain or shine, day and night, leash in hand. It must be horrific I thought, having to take dogs out every day, not being able to come and go as they pleased.

Before long, I started seeing the world through the eyes of a dog. The sights, smells and sounds I was too busy to pay attention to, the life happening all around me, and the pure happiness these dogs have just to be outside and alive another day. Just the thought that they are going out causes them more joy then winning a million bucks – it’s chaotically contagious. I actually started to enjoy those daily walks, rain or shine, good day or bad. In fact, it’s hard to think of much else I’d rather do now after work. I don’t think about anything BUT the present when we are walking the trails around our home. The smartphone stays in the house, and I disconnect if only for a little while.

I also learned to roll with the punches from my dogs. Janie loves to play catch with the ball. She does her best to catch it in her mouth, but even when she misses, she doesn’t stop wagging her tail or get down on herself. As long as she does her best, and I’ve never seen her NOT do that, she doesn’t get attached to the outcome – it’s the ball catching PROCESS that counts. I’m trying to copy her in my own life – doing my best at everything I have control over, but not worrying about an outcome that is subject at least in part to fate.  To paraphrase author Stephen Covey, how we respond to life events matters more than what happens to us, and it’s pretty much all we really have control over.

Finally, I learned patience from our dogs. I frequently come home to a mess, and it’s a weekly occurrence that something gets destroyed. Just today Annie (one of our labs) presented me with a winter glove she found somewhere, now full of holes (I’m sure she has the other one somewhere, waiting to present to me when the time is wrong). Many of my prized possessions have chew marks. Cell phones have been eaten. The cable guy refuses to give us anymore free remotes – I had to start paying for every new one.

At some point, it stopped bothering me so much, and fortunately, it’s a less frequent occurrence as the dogs have mellowed somewhat with age. I guess it just became apparent that these dogs mean more to me than some piece of inanimate (albeit sometimes expensive) stuff. When I feel the anger start to well up when I see a shoe in pieces, I let it go.

In the final analysis, we thought we were helping the dogs when we rescued them from the shelter, but in reality, they taught us so much more about what really matters. When I’m travelling on business, sometimes I’ll go for a walk all alone, and I’ll pass someone and his dog.  I smile and take a minute to say hello and give a pat.  I find myself missing my evening walks with the pack, and it’s really lonely waking up in a king size bed with room on either side of me.

All his life he tried to be a good person. Many times, however, he failed. For after all, he was only human. He wasn’t a dog.”