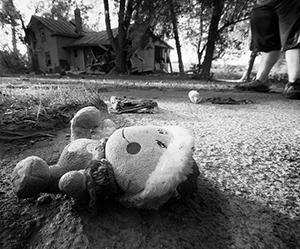 “The strongest oak of the forest is not the one that is protected from the storm and hidden from the sun. It’s the one that stands in the open where it is compelled to struggle for its existence against the winds and rains and the scorching sun.”

It’s hard to believe that over a year has passed since hurricane Irene came and went. For those that live in certain parts of New York State or Vermont, the storm was devastating. My wife grew up in a beautiful Catskill town that was considered ground zero for Irene’s damage – Prattsville, NY. My in-laws and many of Joy’s closest friends still live there.

I remember the feeling of helplessness as the storm hit. My wife was in communication via cellphone with her parents and her tenant (she rented her house in Prattsville), who were trapped in their homes by the flood waters. It was impossible to get to get to them, and many others who were trapped (some on the roofs of their homes), until the flood waters receded. Two people on the mountain top lost their lives in this flood, but considering the complete devastation to some of the mountain towns, it was a miracle that their weren’t more lives lost.

Last year, none of the weather forecasts or computer models predicted the level of flooding that occurred in Upstate NY. In fact, on the day of the flood, we were supposed to go to a ball game. Until mid-morning, we thought the game would still be on, not realizing that it would be upstate NY that would bear the brunt of the storm. Irene’s was called a 1 in a 1000 year event for the area.

What amazes me is the resiliency of the people I know who are still picking up the pieces – people who lost their homes, their animals, and in some cases, their livelihoods. It takes a lot of grit and determination to start over. In August, Prattsville celebrated the anniversary of Irene with a mud fest, featuring fun and games in the mud and dirt. The camaraderie and spirit of the people in the face of devastation is inspiring.

The number of volunteers that have helped rebuild Schoharie and Greene counties is impressive – not just local people (of which there are many), but people from all over the united states spending days or weeks shoveling mud or pounding nails, side by side with the residents.

As I write this, Hurricane Sandy is approaching the Eastern Seaboard. The computer models appear to have narrowed the path to what is being called a worst case scenario. Nature, like life, is unpredictable. We don’t know what tomorrow has in store for us. The best we can do is plan for the worst and hope for the best. If the worst occurs, we have to have the courage and strength to move forward.

May all of the people that are affected by Hurricane Sandy have the same courage, grit and resiliency to rebuild their lives as the people of Greene and Schoharie County, and may the same spirit of helping and charity be found in the face of what could be an historic, tragic natural disaster.